Check out the below Remodeling Magazine’s annual report on the cost and value of
remodeling in 2014.  You will see the very high return on investment trends and check out
the increase from last years report! 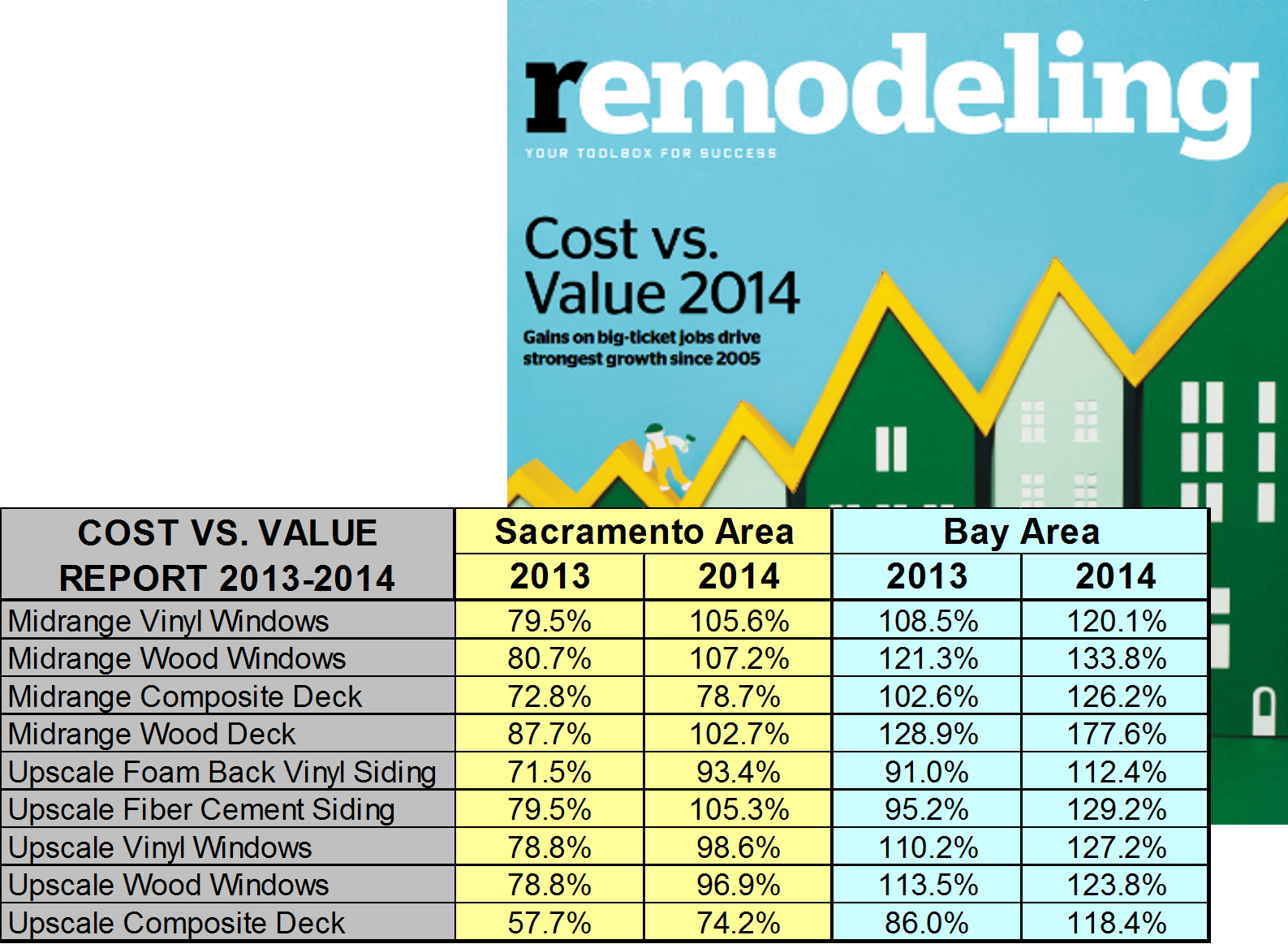 For the second consecutive year, Cost vs. Value data show that the value of remodeling is up for all 35 projects included in the survey. This trend signals an end to the long slide in the cost-value ratio, which began to fall in 2006 and didn’t begin to rebound until last year (see, “Cost vs. Value 11-Year Trend”). For 2014, the cost-value ratio stands at 66.1%, a jump of 5.5 points over last year and the largest increase since 2005, when the ratio jumped 6.1 points to reach its high of 86.7%.

Significantly, for the first time in four years, improved resale value of residential housing had more of an influence in the cost-value ratio than construction costs. A modest 2.2% increase in average national construction costs was more than offset by an 11.5% improvement in average national resale value. This reverses a trend that began in 2010–11, when construction costs dropped dramatically, but resale values dropped even more, driving the ratio down. The situation began to change in 2013, when lower costs were mainly responsible for across-the-board improvement in the cost-value ratio. While this was good news for the remodeling market, costs remained volatile and housing values had yet to stabilize. In what is perhaps the most positive sign in this year’s data, rising resale value is driving the overall market improvement.

There is still some progress to be made before the remodeling market fully recovers, but the 2014 Cost vs. Value Report shows that the national average cost-value ratio is up more than 9%, with 15 projects improving between 10% and 28% compared with 2013 (see “Biggest Gainers”).

The biggest gainer may reflect the market’s response to the year’s unpredictable weather and multiple large storms: Backup Power Generator, an $11,742 project that supplies electricity during a utility outage, increased 28% nationally to its all-time high of 67.5% in percentage of cost recouped, and jumped to 25th in the overall ranking.

More important is the continued presence of several big-ticket projects among the biggest gainers. Attic Bedroom Remodel, with a national average remodeling cost of $49,438, gained 15.6% compared with 2013, reaching a cost-to-value ratio of 84.3% and moving from eighth to fourth in overall rank. Similarly, Basement Remodel, with an average cost of $62,834, gained 10.4% over 2013 to reach a 77.6% cost-to-value ratio, and move from 13th to 12th in rank. Both of these projects have been trending upward in recent years, possibly because, compared with building an addition, they represent an inexpensive way to add living space to an existing home. But the fact that their comparatively high initial cost is balanced by a higher value at resale than at any time since the peak year of 2005 signals a return of confidence in the value of remodeling.

That said, replacements—especially door, window, and siding projects—once again outperformed larger discretionary remodeling projects, when judged solely by national ranking (see “ROI: Replacement vs. Remodeling”). Entry Door Replacement (steel) is once again ranked first, as has been the case since this project was introduced in the 2009–10 report, and is the only project to return more than 90% of cost (96.6%). Low initial cost combined with the positive effect on curb appeal is likely responsible for the high ranking. This is also true of the midrange and upscale versions of Garage Door Replacement, which ranked fifth and sixth, respectively.

At the next cost level, nine of the 14 projects with costs in the $5,000 to $25,000 range are also replacements. (Since the introduction of several low-cost projects to the survey, the Cost vs. Value Report has presented data in four cost categories, making for a better comparison among projects of similar size.) This includes all three Siding Replacement projects, led by Siding Replacement (fiber-cement), an “upscale” project ranked first in this category and second overall, with a cost-value ratio of 87.4% (a 10.2% improvement over 2013); and all four window replacement projects, led by wood and vinyl “midrange” projects with cost-value ratios of 79.3% and 78.7%, respectively.

While the cost-value ratio only occasionally exceeds 100% nationally, this occurs more often at the city level, where it typically indicates either strong appeal for a particular project, or a strong housing market, or both. This year, the cost-value ratio exceeded 100% in more than 300 instances or nearly 9% of the time. (By comparison, 2013 saw just 65 instances of projects exceeding 100%.) Of the 64 markets with at least one project that registered a 100%-plus ratio, 21 had 5 or more. Leading the list of high-ROI projects is Entry Door Replacement (steel), which topped 100% in 38 cities, followed by Deck Addition (wood), with a 100%-plus ratio in 25 cities (see “High-ROI Projects”). Most of the other top-performers are replacement projects, with four notable exceptions: Minor Kitchen Remodel and Backup Power Generator, both of which are under-$25,000 projects; and the two bigger ticket projects mentioned earlier, Attic Bedroom Remodel and Basement Remodel.

This year’s report added 19 new markets, bringing the total number surveyed to 101. (Wilmington, Del., was inadvertently included in this year’s survey. Future surveys will follow the U.S. Census and include Wilmington as part of the Philadelphia MSA.) Performance among these “first-time” markets was split, with 9 performing at or above the national average, and 10 below. Three first-time cities are among the ten markets showing a cost-value ratio above 80% (see, “Top 10 Cities”).

Once again, the Pacific and West South Central regions ranked first and second, respectively, but the New England region moved from 6th to 3rd; and the East North Central region, from 7th to 5th.

Upscale and K&B
With a few already-noted exceptions, more expensive projects did not fare as well as lower-cost projects, although all made significant gains compared with 2013. While the cost-value ratio for all projects improved 10% on average, midrange projects improved 10.6% versus 8.8% for upscale versions. (Many projects in the Cost vs. Value Report have two versions, “midrange” and “upscale,” with lower and higher costs, respectively, based on scope of work, complexity, and quality of finishes.) One exception is Two-Story Addition, which improved 9.9% due to a large increase (11.9%) in resale value compared with a small (1.9%) cost increase. The other exception is the upscale Bathroom Addition. It ranked just ahead of the midrange version, suggesting that the market is willing to pay for more square footage and higher-end appointments in the bathroom.

Once again, the best-performing K&B project was Minor Kitchen Remodel, which includes new appliances and countertops, and a facelift for existing cabinets. At $18,856, it is not the least expensive K&B project, but it delivers a lot of bang for the buck.

In general, kitchen projects outperformed bathroom projects, regardless of cost. One indication is the Major Kitchen Remodel: Despite its hefty $54,909 price tag, its cost-value ratio of 74.2% ranks it second among the seven K&B projects, just above Bathroom Remodel, which is about one-third the size. And the $109,935 upscale Major Kitchen Remodel project ranked higher than the other three much smaller bathroom projects.